On the 14th May 2016, Javier Román Gallery in Málaga ( Spain ) will  have a group exhibition. The subject- Starry Night -  is the one chosen by the people of Málaga on the occasion of its 9th year of  THE WHITE NIGHT.
Close to 50 artists will take part in the show. Among them: Aida Sousa, Carmen Soutela, David Millán, Manuel Nieto, MARÍA Colom, Navas de Velázquez, Prisca Sinay, y Raquel Barnatán. 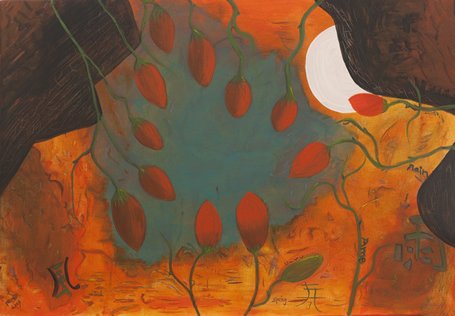 "The Istanbul Artquake Biennale brings together the work of famous painters from all over the world, with Peace as an uniting motto... among them the award-winning painter Raquel Barnatán, known also for her jewellery design."

Raquel Barnatán, painter and member of MAV,will exhibit her paintings under the title: “The White Goddess”  at the Café Belén , from  3rd October till  November 15.

Raquel Barnatán shows her recent work, borrowing the title from the disputed essay by Robert Graves : “ The White Goddess”. For Graves the white goddess is the moon. In his book he tries to prove how true poetry always invokes the white goddess and the artist Raquel Barnatán gives the same title to the exhibition where the moon, the goddesses, poetry and the colour white play an important role.

Café Belén welcomes these days, the exhibition “Raquel Barnatán: The White Goddess”, a show of  the painter’s recent work.
This time her paintings concentrate on abstract and luminous spaces but always focused on the existence  of the goddesses  in nature.
Twelve works that will bring you to a magic world taken from the artist ‘s dreams and her poetic and literary taste.

Raquel Barnatán, Argentinian by birth and sefardi by ascendance, lives since 1986 between Madrid and Istanbul. Her work, prolific in colour and expression and singular  on the variations on moons and fishes, can be seen during October and November at the Café Belén.
Using the painter’s own words: “ I will show at the Café Belén my new paintings, borrowing the title from the disputed essay “The White Goddess” by Robert Graves. For Graves the goddess is the moon. In his essay he tries to prove how true poetry always invokes  the white goddess. I give the same title to my exhibition where the moon, goddesses, poetry and the colour white play a central role. I try to get  most of  the title’s  meanings : White because it is the prevalent  colour in my recent work,  less colourist than the previous one. As in Graves the moon  is very  present, and poetry is quite important in my recent work. Two of the paintings of  “The White Series”are inspired by the poem “Beyond Oblivion” written by the Argentinian poet Alejandra Pizarnik. Another painting,“Silent Snow” borrows  the title from a poem that Jorge Luis Borges wrote after a trip to Iceland ( I had also painted that work after a stay in Iceland).
I give a different touch because I use a poem written by a woman while Robert Graves seems to believe that women can only inspire authentic poetry but never be the creative author.
I somehow combine my two great passions: painting and poetry. In my work I mix figuration with abstraction trying to create an oneiric atmosphere, placed  between reality and dream, but the final meaning  is also open to the  observer’s interpretation.
My actual aim is to convey a feeling of peace and purity.
I return to the theme of the goddess but instead of having her “live” as in my previous work, her presence is reflected in nature, hidden behind the moon, the poppies or the clouds"

Borrowing the title from Robert Graves’ disputed essay “ The White Goddess” , Raquel Barnatán will show at Café Belén (from 3 October  till 15 November) her most recent work. Although literature and the goddesses go on being central in the artistic production  of this painter, her new work reflects a poetic evolution towards an even more oneiric atmosphere with great purity and calm.  Light and whiteness have acquired  a central role.
The influence of poetry in this new “White Sequence” may be seen in paintings like “Beyond Oblivion” or “Silent Snow”.The first inspired by the homonymous poem written by the Argentinian poet Alejandra Pizarnik; the second, by the poem that Jorge Luis Borges wrote after a trip to Iceland, an experience that also served  as stimulus to Raquel Barnatán.
The painter’s compositions have a propensity to use abstraction without neglecting figurative elements that symbolize the presence of the goddess in nature as in her juggling with the moon, the clouds or the poppies.
The paintings shown, twelve in total, include some of her earlier paintings  that had not been exhibited before which  help  us appreciate the contrast with her more colourist stage.


"...The three series that we can see now take us back to the aesthetic and philosophy of that culture (Hittite). "The Goddesses" clearly show her nostalgia for matriarchal societies, for the Goddesses of millenary pantheons, for the peaceful cultures where nature was sacred and there was a balance between the female and masculine. "Seas" represents water's different qualities, always connected to divinities. And a sentence by the Lebanese poet Salah Stetie served as inspiration for her sequence "Secret Tears" : "Everybody, with his secret tear, waters a flower that only he knows..."


" ....at the Coronado Gallery (the exhibition), "About goddesses, seas and secret tears", Raquel Barnatán's  mythical and poetic painting..."


"The new paintings of Raquel Barnatán are exhibited in an exquisite premise of Puerta de Toledo: Kibele- Space. Its name reminds us of the most emblematic square in Madrid.
Without even realizing we are taken to the Hittite culture trough ideas coming from the artist's subconscious. The atavic symbolism is mixed with a subtle romanticism, and the artist's shyness appears with the porous brush strokes of fog.
Raquel Barnatán's painting is a voyage to the soul's depth, guided by an aesthetic experience that moves between colour and dream. The light colours invite you to meditate without surprises: harmonious."