You are at: English » Various » Texts by Victoria Sendón de León 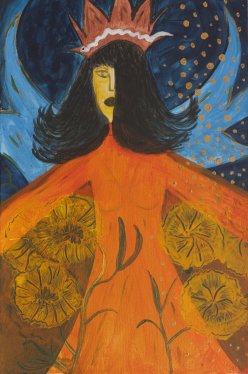 Why the Goddess Fortune is often shown blind?. She sails between sky and  earth, pouring out her gifts over the world. Nevertheless, that disturbing characteristic exists; does she pour out her favours guided by chance?. Or perhaps only the chosen may enjoy her presents?
In this representation, the artist seems to show that the heavenly bodies in the starry sky, as well as the blooming earth are hers and every mortal's home.
The story goes that Zeus, when small, playing with Amalthea, the goat milking him, broke one of her horns. God, to make up, decided that whoever could find the horn would enjoy the abundance of all kind of riches. Since then the cornucopia is shown overflowing with fruits.
Life -represented by the serpent- is our best possession, and in life we all find our horn of plenty, since life is abundance, though sometimes we only glimpse scarcity. It is actually us who are blind. This representation of the Goddess invites, with no doubt, to the joy of living. 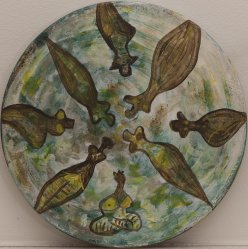 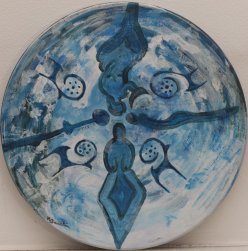 Gaia's Goddesses I and II

After Chaos Gaia came forth, the primal mother. Then Eros impelled her to create a world, the world : skies, seas, mountains, forests... And then Gaia joined the sky Uranus, giving birth to a whole generation of divine daughters and sons. These Goddesses of second generation are the ones appearing in the magic circle of wholeness, in the sacred uterus of the Great Mother, they are the ones ruling the skies and the rhythms, life and death, love and remembrance, the generation of new beings in a spiral of cosmic happiness. 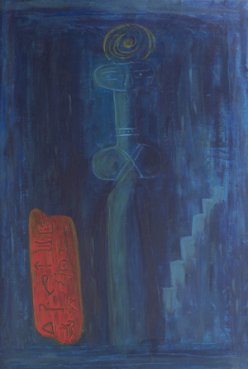 The black Goddess, the powerful Mother travels from the heart of the Near East, at the Phrygian mountains till the West, her temple was built at the Vatican hill, overlooking the city of Rome.
She is as ancient as our dreams, as dark and blue as our foretelling, as undecipherable as those hieroglyphic signs waiting in silence to be deciphered, since her secret wisdom is endless...
She is the black stone that unknowingly, so many other people adore. She, Cybele is still alive in an awakening dark splendour. 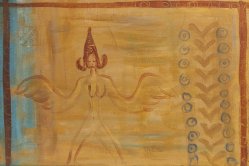 Like the ancient bird-goddess, she is mystery's messenger, the visible incarnation of an invisible world.
Then, later on when the winged beings formed angels or the Holy Spirit, it was when her memory had already been forgotten.
We have never seen a winged being with female attributes. The Phrygian cap was always worn by magicians or wise men, but in this painting we see both facts united, because She is not only the Queen of earth and heaven, but also the energy that gives life to everything: the Spirit.
Life, death and  regeneration are attributes of the sacred cycle the Goddess rules, our Goddess. 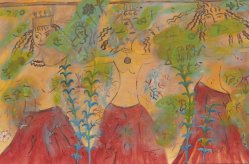 I hesitated about their identity. Dancers, priestesses, goddesses?. Cretans, for sure. That curly hair free like their breasts, those colours reminding "the garden of delights", that triad of women... But yes, they are priestesses representing the Great Mother, the Goddess.
The symbols are exact, indisputable. The opium shoots of sacred rituals, the pendant with the spiral of life, those small heads representing the people in anticipation for the wise messages... And above all they convey joy of life together with a chant  to Nature... not in vain, Crete was called Macaronesia, the blessed island. As an astronaut has said after seeing the earth from space: "What did we do to turn this paradise into hell?"

( Translated from spanish by Raquel Barnatán. )